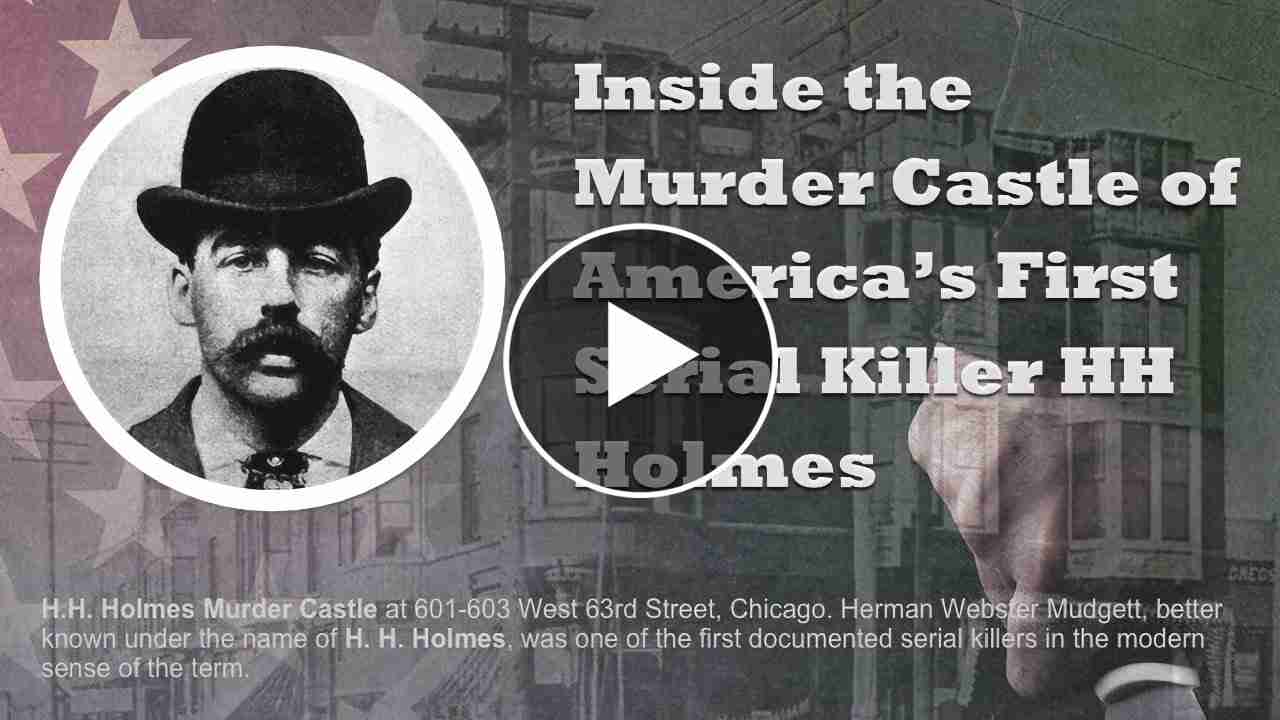 A serial killer is someone who commits a series of murders that often have no clear motive and usually follow a predictable and characteristic behavior pattern. Sure, there are many notorious serial killers from all around the world, but one of the most famous is America’s own HH Holmes. And while some of these people do not have apparent motives, it was definitely out of greed and for financial gain in the case of Holmes. Today, we’ll look at the first serial killer in America and discuss the HH Holmes murder castle.

Who Was H.H. Holmes and What Did He Do?

H.H. Holmes was born Herman Webster Mudgett but was better known as Dr. Henry Howard Holmes. He was born in Gilmanton, New Hampshire, on May 16, 1861. Holmes was a known con artist and trigamist who gained the nickname the “Beast of Chicago.”

It’s believed that he killed anywhere from 20 up to 200 people, but he only confessed to murdering 27. Many of these victims were killed in his custom-built home that would later be nicknamed the “HH Holmes Murder Castle.”

Holmes was born into an affluent family and therefore enjoyed a privileged childhood. It’s often said that he was astute even at a young age, but there were also haunting signs of what would come later in his life. For starters, he showed a great deal of interest in medicine and eventually began practicing surgery on animals. There are even accounts that he was potentially responsible for the death of one of his friends.

At 16, H.H. Holmes graduated from Phillips Exeter Academy and decided to take on teaching jobs in Gilmanton before moving onto nearby Alton. In July of 1878, he married a woman named Clara Lovering. He had a son with her in 1880 named Robert Lovering Mudgett. His son would later become a certified public accountant and serve as city manager for Orlando, Florida.

His housemates said that Holmes treated Clara very violently, and before he graduated in 1884, she moved back to New Hampshire. She would later write that she knew very little of him after leaving. Holmes then moved to Mooers Forks, New York, where a rumor began to circulate that he was the last person seen with a young boy who disappeared. Holmes told police that the boy went back home to Massachusetts, so they never investigated, and H.H. left town quickly.

His next stop was Philadelphia, Pennsylvania, where he got hired as a keeper for the Norristown State Hospital, but he quit the job after only a few days. He would later take a job at a Philadelphia drug store, but while working there, a boy died after taking medications he had purchased from the store. Holmes claimed to have no involvement in the death and left the city immediately. He then moved to Chicago and changed his name to H.H. Holmes to avoid being exposed by victims of previous scams.

While he was still married to Clara, Holmes married Myrta Belknap in late 1886. He later filed for divorce from Clara and alleged infidelity on her part. She most likely never even knew of the suit, and the divorce was never finalized. By July of 1889, Holmes had a daughter named Lucy Theodate Holmes with Myrta Belknap and lived with the two in Wilmette, Illinois, even though he spent most of his time in Chicago for business. In 1894, while still married to both Clara and Myrta, Holmes married Georgiana Yoke in Denver, Colorado.

The short answer is yes! By 1885, H.H. Holmes had made his way into Englewood, Illinois, where he began working at a drugstore at Wallace Avenue and 63rd Street. He frauded the owners and bought the property right across the street. He then drew up blueprints for a three-story multi-use building. The property would include retail space, a drugstore, and apartments. It would also have trap doors, a basement made for disposing of bodies, and airtight rooms.

As his ‘Murder Castle’ was being built, he would systematically fire employees to ensure that no one knew the extent of his final plan. HH Holmes murder castle was completed in 1892, just in time for the Columbian Exposition World’s Fair.

The first floor of the murder castle housed the drugstore, while the third floor contained apartments. Other than the basement, the creepiest part of Holmes’ castle was the second floor. This floor met tourists with several dozen rooms that were soundproof and asbestos-packed. The rooms were designed as labyrinths of disorienting staircases and doorways that included chutes that would drop guests directly into the basement, acid vats, a crematorium, and quicklime pits.

It’s said that he invited guests of the World’s Fair to stay at his hotel, and following the end of the event, there was a long list of missing persons, of which 50 of them were known to have stayed at the hotel. Holmes was known for preying on women, mainly because he would seduce, trick, and then kill them, so no one knows the actual number of people he murdered at the property. Some of the women he would enter into an engagement with before they would soon disappear, while others were lured with promises of employment.

The address of H.H. Holmes’ Murder Castle was 601-603 West 63rd Street in Chicago, Illinois. The building remained there until it was torn down in 1938. The site is now the home of the Englewood branch of the United States Post office. Even though it’s no longer standing, the location is still a popular stop for tourists to visit.

The Capture and Arrest of H.H. Holmes

With insurance companies after him for arson, H.H. Holmes finally left Chicago in July of 1894. He traveled to Fort Worth, Texas, where he had inherited property that he swindled from the Williams sisters, at the modern-day intersection of 2nd and Commerce Street. Once again, he attempted to build a structure without paying his contractors or suppliers. Unlike other properties he owned, this site was never used for any of his killings.

Holmes was arrested for the first time in July of 1894 for selling mortgaged goods in St. Louis, Missouri. His jail time didn’t last long because he was bailed out by a convicted outlaw named Marion Hedgepeth. He came up with a plan to take an insurance policy out on himself and fake his death; in turn, he promised Hedgepeth $500 in exchange for the name of a trustworthy lawyer. Holmes was directed to an attorney named Jeptha Howe in St. Louis, who found Holmes’ scheme brilliant. Regardless, the plan didn’t work because the insurance company was suspicious and refused to pay out on the policy. Rather than keep pressing the claim, Holmes concocted another plan with Pitezel where this guy would fake his death and his wife would collect the $10,000 policy, which she would then split with Howe and Holmes.

The initial plan was for Pitezel to create an inventor alter ego, B.F. Perry and they would use a corpse to fake Pitezel’s death. However, Holmes had another plan. He killed Pitezel using chloroform before setting him on fire, which allowed Holmes to collect on the life insurance policy. He continued on with schemes for a few years, and in this time, took the lives of three of Pitezel’s children, who he had conned the wife into letting him take.

Holmes was finally caught after he attempted to use yet another corpse in a life insurance scam. He eventually confessed and said, “I was born with the devil in me. I could not help the fact that I was a murderer, no more than a poet can help the inspiration to sing.” He was executed by hanging on May 7, 1896, in Philadelphia, Pennsylvania.

If you’d like to learn the story in more depth, there is a movie based on the life and times of H.H. Holmes titled H.H. Holmes: America’s First Serial Killer.

Next read: Who Was Pablo Escobar?