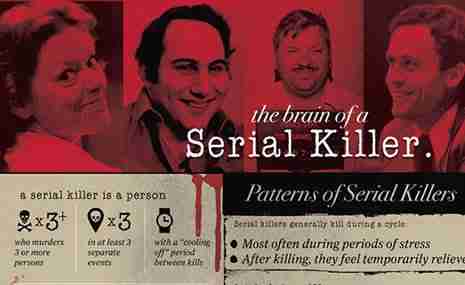 We all know some of the most famous names, such as Jeffrey Dahmer, Ted Bundy, and John Wayne Gacy, but what is a serial killer? By definition, a serial killer is a person who kills three or more persons in three or more separate incidents, with a cooling period in between the killings.

Serial killers often strike during cycles that can be brought on by extreme stress, and following the incident, these feelings are temporarily relieved. The motivation for these murders can range from a desire for money or power to the need for a thrill or to rid the world of “wrongdoers.”

But how do we know that someone is a serial killer? This question is a bit more complicated to answer, as not every serial killer cites the same reasons for their actions. What is known is that a study was conducted on a group of 50 serial killers, and each of them mentioned some form of childhood abuse as the reason. The types of abuse ranged from physical and emotional to sexual and just maltreatment in general.

How does the brain of a serial killer work?

Sure, those who repeatedly murder other people provoke repulsion, but they also maintain a certain amount of fascination in society. But can neuroscience and modern psychology tell us more about what happens in a serial killer brain? Before we get too far into how a serial killer’s brain works, let’s take a look at the characteristics of such people.

What are the characteristics of a serial killer?

Characteristically, serial killers exhibit a myriad of personality traits that include:

When you look at this list, consider the first two traits: They generally lack empathy for other people and have no remorse or guilt for their actions. And when you combine these two traits alone, it can be a recipe for personal disaster. Many serial killers are also superficially charming, allowing them to manipulate and lure victims into their path of destruction.

Some experts believe that the cognitive dissonance displayed by serial killers is because they are individuals living with two minds. On the one hand, there’s a rational person who can navigate through social norms, charm people, and possibly even seduce them. However, on the other side, there’s a dark, sinister force capable of unspeakable violence against others.

What part of the brain do serial killers use?

This is the million-dollar question that many neuroscientists and modern psychologists are trying to answer. Is there some abnormality within a serial killer’s brain that makes them murder? What part of the brain do serial killers use? And while there is no short answer, many believe the problems lie in the over or under activity in the brain, specifically the prefrontal or orbital cortexes.

Neuroscientist, James Fallon, has been studying information and conducting brain scans in an attempt to learn more details. In fact, he scanned his own brain and that of his son, and his findings were shocking! Fallon discovered that he had the same low activity levels in his orbital cortex as that of a serial killer. Moreover, he found that his ancestry features a long line of murderers.

So, why does this matter? Well, Fallon found that the orbital cortex is the area of the brain responsible for ethical behavior, impulse control, and decision-making. This means that those with low activity in the part of the brain are either sociopaths or free-wheeling types. Low orbital cortex activity means less normal suppression of behaviors, including violence, rage, sex, drinking, and eating.

Furthermore, he found that psychopathic tendencies may be hereditary. After he tested his family’s DNA for violent genes, this finding was discovered, which led to him closing in on the MAO-A, or warrior, gene. This gene is responsible for regulating the body’s serotonin, which, as you know, affects mood. These findings have led Fallon to change his perspective on the whole nature vs. nurture debate. At one time, he believed that brain function and genes dictated everything, but he now believes that childhood experiences may actually be the key.

The brains of murderers look different from those belonging to other criminal offenders. The differences could be linked to how they process morality and empathy. A neuroscientist from the University of Chicago co-anchored a study that examined brain scans of over 800 incarcerated men. They found that men who attempted or committed homicidal acts had a reduced amount of gray matter compared to men involved in other crimes. The reductions were predominantly present in areas of the brain associated with social cognition, behavioral control, and emotional processing.

Dr. Helen Morrison, a forensic psychiatrist, spent years interviewing 135 serial killers to get a glimpse into how their brains worked. In fact, she spent over 600 hours just interviewing John Wayne Gacy. Serial killer Gacy claimed that alcohol would make him blackout, so he never remembered the killings. However, Dr. Morrison contended that he had never drunk before his murders.

After interviewing 135 serial killers and personally examining Gacy’s brain, she concluded that “Murder is just an action. It has no meaning. It has no motive. It has no underlying cause. The most frightening part about a serial killer is there is no reason.”

She said that still little is known about what creates a serial killer. Scientists have determined that it’s something in the “electrical system” that’s acted upon by hormones present in the brain during the beginning of adolescence. That’s all they know.

What’s apparent is that one cannot predict human behavior. You cannot define the reasons for human behavior, and this was evident in the Gacy case. He was only interested in the power of life and death and being the person making the call. His excitement was the power of deciding when another person dies, and that’s the scariest type of serial killer.

Patterns of a Serial Killer

While we’re still a long way from fully understanding serial killer brains, we have been able to effectively map the patterns of a serial killer. Here’s what we know:

Who are the top 10 serial killers of all time?

As you can see, there have been a lot of serial killers throughout history. So, who are the top 10 serial killers of all time? Let’s take a look (in no particular order):

Who is the sickest serial killer in history?

It’s said that one of the sickest serial killers in history was HH Holmes. He went as far as to construct a “Murder Castle” where he lured his victims. Once inside, his victims would become disoriented and lost before becoming caught in one of his traps. Another at the top of this list is the British doctor named Harold Shipman. It’s said that he killed over 200 people, mainly consisting of older women and men.

As medicine and science advance, there’s no doubt that we’ll know how the brain of a serial killer works one day. In the meantime, there are neuroscientists and psychologists around the world conducting studies on brain scans of serial killers. The good news is that the occurrence of serial killers has dramatically reduced within the last decade or so. In the end, we can only hope that we get answers soon or this decline continues for decades to come.