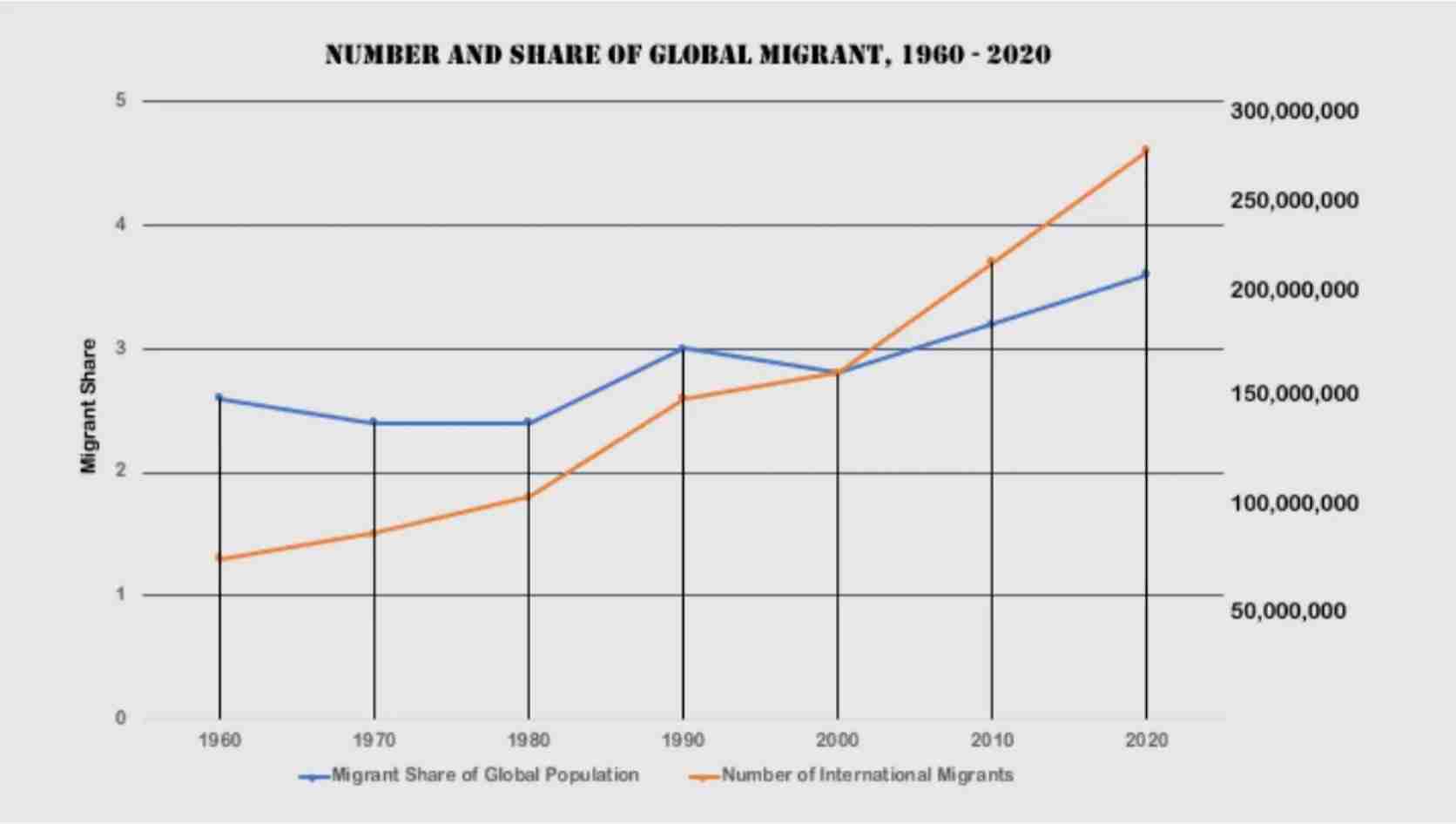 In 2020, the number of migrants had quadrupled since 1960, with 3.6% of the world’s population living outside of their country of origin. In just the last decade, nearly 60 million people have become migrants.

There are numerous reasons for this, including labour and family migration. This ‘International Migration Trends‘ infographic shows that the number of migrants is increasing year on year and there is no evidence to suggest that is going to change any time soon.

Migrants don’t necessarily go to one country in particular, however, most migrants do tend to move to high-income countries. They hope to benefit from the social stability and the stronger economy that the country has to offer. As you can see from the table, more than half of migrants will move to Europe or Northern America. Almost 20% of the remainder will choose to live in Northern Africa or Western Asia. And as you can see, no migrants choose to live in Oceania, excluding Australia and New Zealand which do attract a small 3% of migrants.

In terms of individual countries, the US has the highest percentage of migrants standing at 18%. In 2020, the US had over 50.6 million migrants. The next four countries on the list are Germany, Saudi Arabia, Russia and the UK, collectively these four countries still have fewer migrants than the US, with a combined total of 50.2 million. Since 1990, the UK, Australia, Spain and the United Arab Emirates have made it into the top ten destinations, which could mean we the number of migrants in these countries increase.

Where are these migrants originating from?

Despite some areas showing higher on this table than the last one, the two tables aren’t that dissimilar, with Oceania accounting for 0% of migrants and Australia/New Zealand making up only 1%, both taking the bottom places on the table again.

Some of this migration is due to labour, others are due to family migration, and in some cases, the migration is for students who have decided to study abroad. Sometimes this is temporary and the student returns to their country of origin, in some cases a student will remain to continue studying or gain work experience, and other students will choose to make their move to another country more permanent. What future statistics will look like, therefore, we don’t know. But we can see the trend of international students currently.

In 2019 almost 6.1 million students were studying outside of their country of origin. In 2015 this figure was just 4.8 million and in 2020 it was 2 million, so we can see that studying abroad is becoming more popular.

The UN has reported an increase of migrants across all of its countries, particularly Europe and Asia. As you can see from the graph, other areas of the world have seen a steady incline, whereas both Europe and Asia have seen a massive and sharp increase in the number of migrants choosing to live there. With the curves of both of these countries being far steeper than the others, it is likely that the number of migrants moving to these areas will continue to rise.