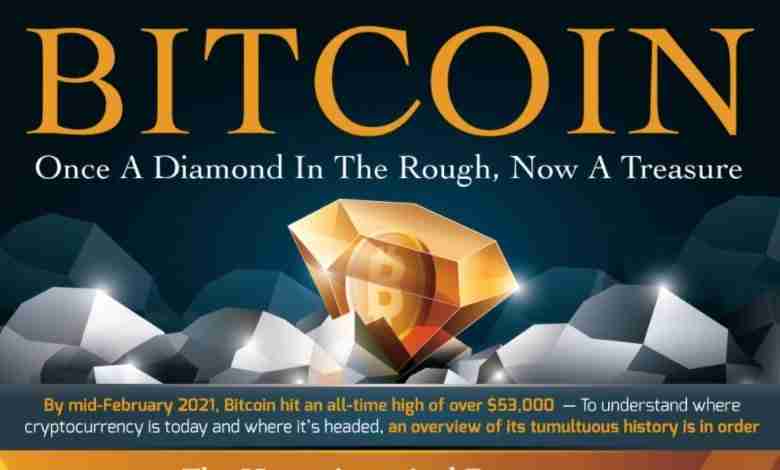 No matter where you are in the world there is one thing you must have in order to survive: money. Typically paper or coins, currency types vary by area. But what about Bitcoin? What is it? Is Bitcoin the future of money? Is Bitcoin a good investment for the future?

In 2009, Bitcoin appeared in both our physical world and the world of cryptocurrency. However, even though “mining” of the crypto began there was no predetermined value set for this currency.  However, just a year later in 2010 the first purchase– two pizzas– was made with bitcoin for a whopping price of 10,000 bitcoin.

On a steady incline with a price of 1,000 dollars USD, Bitcoin hit its first crash in 2013. Devaluing down to a price of 300 dollars USD, it would take over three years for Bitcoin to get back to that $1000 valuation.  Then in 2018 Bitcoin had another devastating crash, by over 70% and the outlook was bleak.

However, not even a year later Bitcoin’s valuation was on the rise.  More than doubling its value Bitcoin proved to be a better investment than stocks to many investors.  Now, it has a valuation of over $53,000.

Bitcoin is seen as a universal and stable currency method that can be unilaterally introduced to all countries.  With support from Fortune 500 companies like Tesla and Apple, Bitcoin is poised to become an even bigger success within the year.

Consumers can expect to see Bitcoin enabled payment vehicles, emerging use cases, and increased investing from traditional and non-traditional investment firms.  However, there is one major drawback to Bitcoin.

Bitcoin takes a significant amount of energy to help maintain and “mine” its value.  It is estimated to be more than the combined total usage of Ireland and Hungary.  In order for universal adoption, Bitcoin must find a more sustainable solution.