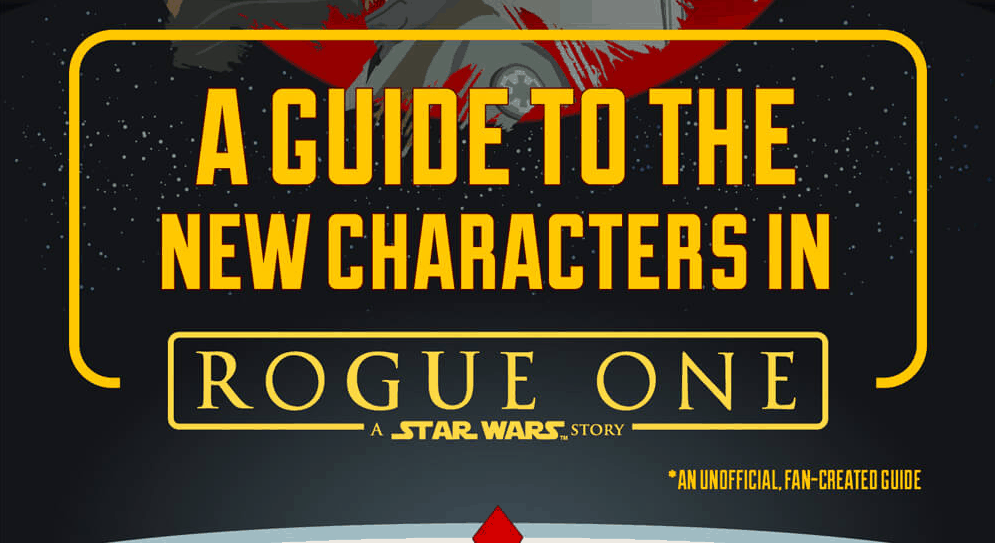 She is a streetwise delinquent who has been on her own since 15. Jyn Erso is impetuous, defiant and eager to bring battle to the Empire. Not to mention, She’s a real survivor with fighting skills and a knowledge of the galactic underworld that the Rebel Alliance desperately needs.

Is she Rey’s long-lost mother from the Force Awakens? And why is she wearing a Kyber Crystal necklace in the latest trailer (the element that powers lightsabers)?

Andor is Erso’s new partner to help the rebellion’s effort to steal the Death Star Plans. He’s a by-the-book Rebel intelligence office intelligence officer with combat field experience. Furthermore he commands respect from his Rebel troops with his ability to keep a cool head under fire and complete his missions with minimal resources.

Force-faith Warrior Monk. He’s no Jedi, but he believed all living things are connected through the Force. His blindness does not prevent him from being a highly skilled warrior. Though he lacks Force abilities, this warrior monk has rigorously honed his body through intense physical and mental discipline. Some early trailers show him with some kind of blaster on his back. A blind man with a blaster?

Heavily armored, the harsh reality of his Imperial-occupied home world has hardened Baze Malbus into a pragmatic soldier and a crack shot with his heavy repeater cannon. Thus a bravado that provides a marked contrast to the spiritual centeredness of his best friend and moral compass, Chirrut Imwe. Baze doesn’t believe in the Force – but he believes in Chirrut. He’s in the fight out of devotion to his blind, trouble finding friend.

Bodhi is this Rebel squad’s lead pilot. A former Imperial pilot, Bodhi has a strong piloting and technical skills that he will put to use for the Rebellion. Ever practical, but highly anxious, Bodhi must gather his courage to bring the battle to the Empire.

A reprogrammed Imperial security droid now loyal to the Alliance. K-2SO is an alarming sight standing within the secret Rebel base. The pragmatic droid is tough, confident and not especially interested in ‘human/cyborg relations’. By all means, picture Chewbacca’s personality in a droid’s body.

This is Jyn’s estranged father who is a theoretician, a mathematician, an engineer and experimental physicist. At the present time he is the preeminent authority on crystals and their use in supplying enhanced power. Where has Galen been, if Jyn has been on her own for years.

Gerrera leads a band of Rebel extremists. Saw has lost much in his decades of combat. But occasional flashes of the charismatic and caring man he once was shine through his calloused exterior. Gerrera is bunkered on the ancient world of Jedha. Coordinating a prolonged insurgency against the Imperial occupation. That is to say, Saw’s ailing health has not withered his resolve to fight.

This immortan is an alien from a planet called Yar Togna. Yar Togna has been invaded and decimated by the Empire. At the present time, he fights alongside Saw Gerrera, joined by his twin brother Benthic.

Orson Krennic is head of the Empire’s Advanced Weapons Division. He’s obsessed with the completion of the long-delayed Death Star project. A cruel but brilliant man, Krennic has staked his reputation on the delivery of the functional battle station to the Emperor.

The elite soldiers of Imperial Intelligence, Death Troopers are encased in specialized stormtrooper armor with a dark, ominous gleam. These larger, leaner soldiers serve as bodyguards and enforcers for Director Krennic.

Specialist storm troopers stationed at the top secret Imperial military headquarters on Scarif. Shoretroopers patrol the beaches and bunkers of the planetary facility.

These All-Terrain Armored Cargo Transports appear updated from The Empire Strikes Back with a slightly slimmer and more agile frame. This could be an illusion. However it’s clear what works on snow appears to work just as well on sand.

Darth Vader certainly isn’t a new character, but one so significant he can’t be dismissed.

Further reading: Women of Star Trek: Where Are They Now?