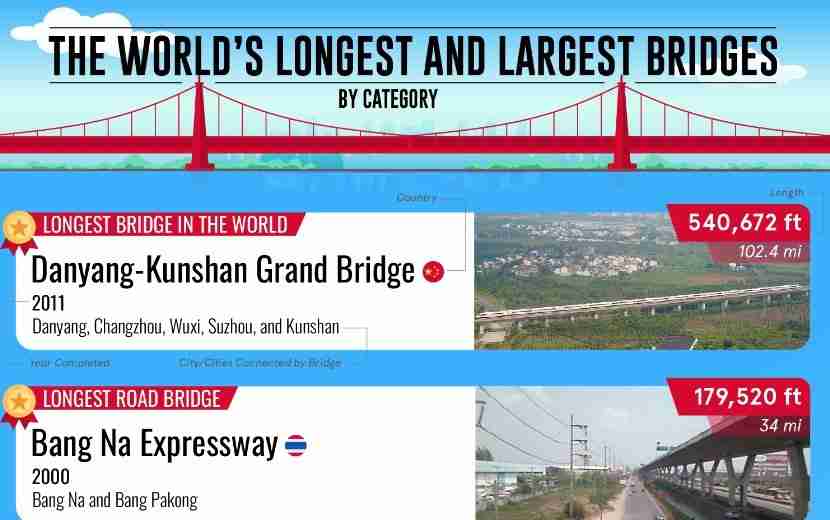 Modern engineering has resulted in many magnificent marvels around the world, and the best of the best are shown in this new infographic from the team at Alan’s Factory Outlet, which looks at the world’s longest and largest bridges by category. The infographic itself offers a great variety of interesting information about each bridge, including where it’s located, how long and/or high they are, what it’s most known for, and when it was built.

There are notable and impressive bridges from all over the globe included on this infographic, including one that is perhaps more notable than any other. Built in 2018, the Hong Kong-Zhuahi-Macau Bridge is 179,520 feet (or 34 miles) long, and is not only the most expensive bridge ever built at a cost of $20 billion, but it’s also both the longest cross-sea aqueduct and the longest steel bridge-tunnel system in the entire world.

Another fascinating overpass on this infographic, found in the United States, is the Lake Pontchartrain Causeway, which was originally built in 1956. At an impressive 125,822 feet long (or 23.83 miles long), the Causeway stretches from Mandeville, Louisiana to New Orleans, Louisiana, and is known as the longest continuous aqueduct in the world.

The Lake Pontchartrain Causeway is one of a few aqueducts on this infographic that can be found in the United States. Another would be the Evergreen Point Floating Bridge in Seattle, Washington. Built in 2016, this bridge is an impressive 7,710 feet long and 116 feet wide, and both the widest bridge in the world and the longest floating overpass in the world.

On the other side of the country is the Walkway Over the Hudson, which was built in 1889 and can be found in Poughkeepsie and Highland, New York. It’s the longest elevated pedestrian bridge in the world at 1.28 miles high (or 6,768 feet tall).