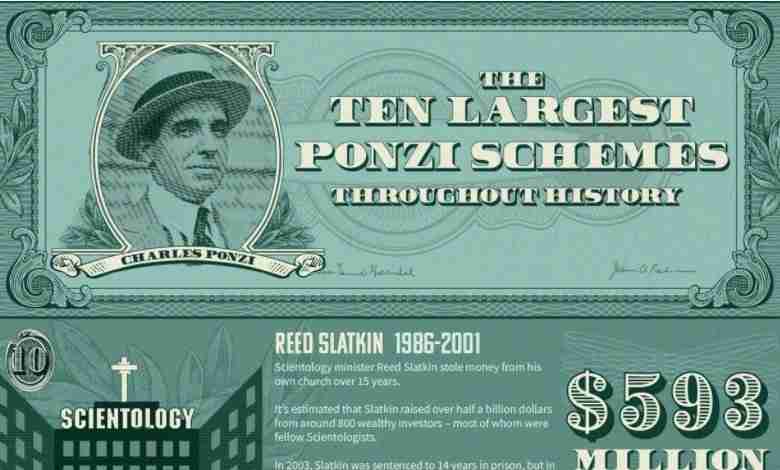 Comparethemarket.com.au created an infographic that counts down the 10 largest Ponzi Schemes by the amount of money scammed. To mark the anniversary of the deceptive investment fraud.

It might be the most un-celebrated centennial you’ve never heard of – the year that the Ponzi Scheme turns 100.

The term was ‘coined’ in 1920 when Charles Ponzi defrauded thousands of Americans. Billions of dollars have been scammed from innocent people through the fraudulent investment scheme. By promising large returns, the schemer gathers money from new investors to pay old ones. Thus creating a cycle of large gains for the main perpetrator.

The largest Ponzi Scheme on the list involves Bernie Madoff. Swindling $65 billion from thousands of investors. This makes up most of the roughly $80 billion total that was accumulated across all ten of the largest schemes.

During the 90s and early 00s, Madoff would accept money from private investors and deposit it into a private bank account. When an investor asked for their money, he would withdraw it from the same account having never made any legitimate investments. Madoff is currently serving a 150-year sentence in a North Carolina prison.

100th Anniversary of the Ponzi Scheme

The anniversary comes at a time where people’s fear of Ponzi Schemes is higher than it has been in the past. Following 2018 where statistics indicate the lowest number of fraud schemes in a decade (47 schemes). 2019 saw a sudden surge where figures were the largest within that same decade (60 schemes).

You’ll also learn how Ponzi Schemes work in depth and how to avoid getting caught up in one.