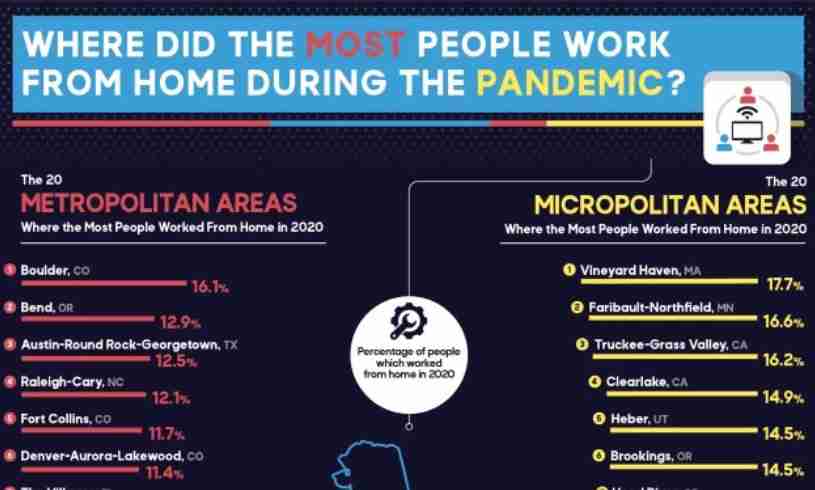 One of the biggest changes at the start of the pandemic was that work from home became a new reality for many Americans. While some employees returned to the office when restrictions were lifted, many companies chose to let their employees continue working from home and some even decided to make it a permanent switch.

We found the areas of the United States where the most people worked from home throughout the early stages of the pandemic using this chart from FinancialForce that includes a ranking of the top 20 metropolitan and micropolitan areas in the country with the most people that worked from home throughout the entirety of 2020. They collected these statistics through the U.S. Census Bureau’s annual American Community Survey. They even took their analysis one step further and also found the 20 metro and micro areas that had the biggest increase in people that worked from home from 2019 to 2020.

Vineyard Haven had some impressive numbers with not only the highest percentage of people that worked from home, but also the biggest WFH increase in the country. It was found that 17.7% of their population worked from home, a 5.2% increase from 2019.

The map visual they included with the ranked lists makes it easy to see the work from home trends across the country. A majority of the areas in the U.S. that had the most people working from home fell within the Rocky Mountain range, and along both the East and West coasts. Residents of Colorado especially were found to be the most likely to work from home with three of the top 20 metropolitan areas and four of the 20 metropolitan areas located within the state.

As the team at FinancialForce pointed out in their write-up about the graphic, the driving dangers that are associated with mountain driving may be the reason behind Colorado’s high rates of people that worked from home. Did the area you live in make the list of one of the top places people were found to work from home?