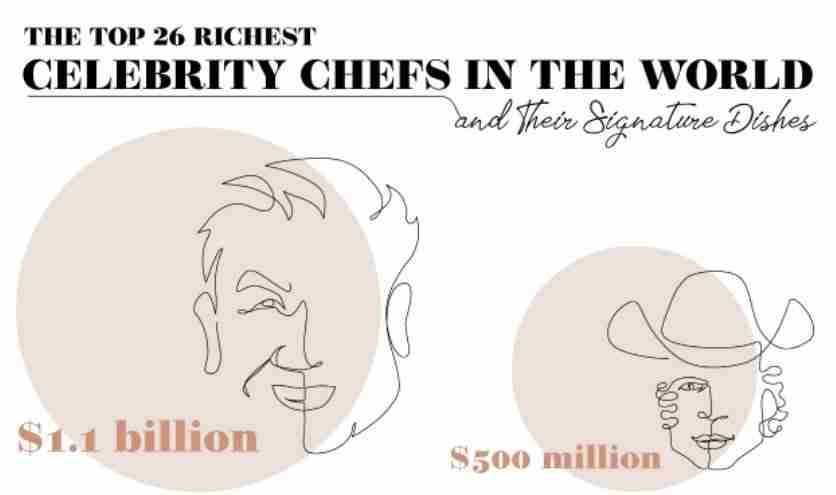 In the US if you are a chef you can expect to earn between $28,370 and $86,990 on average a year. However, if you are a celebrity chef, you have the potential to earn billions.

The richest celebrity chef in the world is Alan Wong. He is a pioneering Japanese chef and global phenomenon. Wong has a real rags to riches story, he began as a dishwasher before working his way up to find his way into the kitchen of the famous chef André Soltner. He then went on to open his first restaurant, The Canoe House in 1989 in Hawaii. He also helped launch a program called Hawaii Regional Cuisine. Wong wanted to end having to get ingredients shipped from long and expensive distances and wanted to focus more on traditional Hawaiian cuisine and local ingredients. With this new initiative, Wong helped the entire Hawaiian hospitality industry and boosted business for local farmers, and fishermen helping the smallest local communities throughout the island.

Other chefs that top this list from howlongtocook.org are Kimbal Musk, Jamie Oliver, Gordon Ramsay, Nobu Matsuhisa, Wolfgang Puck and Rachel Ray, just to name a few. What is also nice about this visualization is that it shows the chefs signature dish. Some dishes like Ree Drummond’s, chicken pot pie or Kimbal Musk’s roasted veggie bowl are simple dishes that have made these chefs millions. Some dishes are more involved like Nobu Matsuhisa’s yellowtail with jalapeno and sashimi salad or Levi Roots ackee and saltfish.

What dish on this list would you like to try the most? Some of the most popular dishes on the list include David Chang’s pork buns. Rachel Ray’s Mexican lasagna also sounds like such an interesting dish. Of course, not many people would pass up trying Emeril Lagasse’s famous banana cream pie!