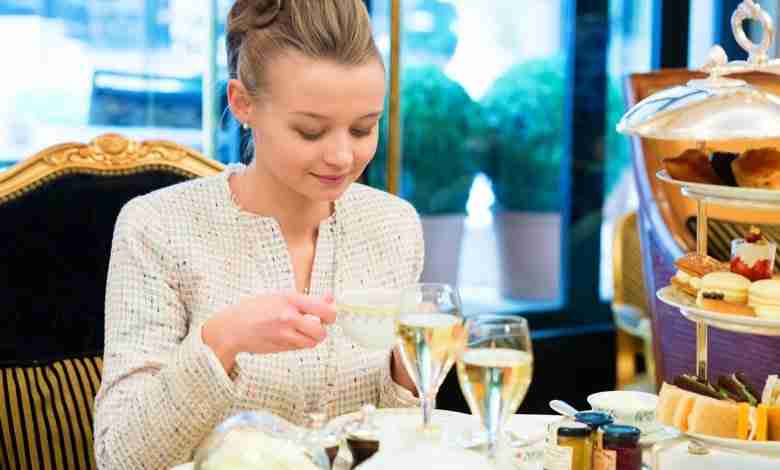 The History of High Tea – English High Tea has been a British tradition since the 1600s. And while it dwindled in popularity for some years, high tea has made a popular comeback into modern life. The tea is generally drunk while sitting in a high-backed chair in front of a table full of cold cuts, pickled fish, vegetables, salads, potatoes, homemade bread, tarts, pies, fruitcakes, and more. Some people confuse high tea with afternoon tea, but there are differences which we’ll discuss today.

Though the name may imply that it’s reserved for the rich, it’s actually ‘afternoon tea,’ which was preserved for them during the 19th century. If you were a worker in newly industrialized Britain, tea time was put off until after work was over between 5 pm and 7 pm. Tea needed to be served with heartier meals that consisted of more than just tea and cakes by this hour. Workers needed something filling after a hard day of labor, so high tea time consisted of hotter and more satisfying foods that were accompanied by a cup of tasty, strong tea to revive their tired spirits.

In today’s world, some working-class families refer to their evening meal as “tea,” but working patterns are changing once again, so many call this meal supper. It’s believed that when the word “high” is added to the phrase “high tea,” that it refers to the fact that afternoon tea is served in low, comfortable parlor chairs, where high tea was served at a table with high-back chairs.

What Is Served At High Tea?

As we mentioned, high tea, or “meat tea,” is usually served between 5 pm and 7 pm, making it dinnertime. So, high tea is served at a higher table with high-back chairs and is much more common for the working-class than it is for the elite.

Here are foods you can expect to be served at high tea:

As you already know, many people confuse afternoon tea and high tea. However, there are differences between these two tea times. Since we’ve already discussed what high tea is, let’s take a closer look at afternoon tea.

What is afternoon tea, and how is it different from high tea?

Afternoon tea was generally reserved for the elite, as they had the time to enjoy a light, afternoon meal to tide them over until dinner. You may also hear this time called “low tea,” and you’ll find it served using a formal tea setting with lighter foods. The most common time for this tea is between 2 pm and 5 pm, so the foods are essentially finger foods or snacks.

Here’s what you can expect to find at afternoon tea:

As you can see, afternoon tea is just that – tea served with an afternoon snack. On the other hand, high tea is served at dinnertime with more satisfying foods.

So, you may be wondering when the history of high tea began, and the truth is, while tea has been around for millennia, the tea that we know was only popularized in England in the 1600s. Let’s look at the timeline:

Tea arrived in England between the years 1652 and 1654. It occurred around the time that Charles II married Queen Catherine of Braganza. Being from Portugal, the Queen grew up drinking tea, so she brought her beloved drink with her to England.

Tea was introduced to England’s coffee shops as a medicinal drink for the public in 1657. This is also the first year that tea parties began gaining traction. It was customary for women to enjoy tea inside their bed chambers or at an all-female gathering during this time.

Among the upper class in the 1700s, tea gardens began to grow in popularity.

It’s said that the tea service originated in 1710 with Queen Anne, as she used the first large, silver teapot.

The concept of high tea originated in the 1800s, but not by the elite upper class. Alternatively, it was created by the poor to middle-class working families as a substitute for supper.

Anna, the Duchess of Bedford, began using tea service in the 1830s, and she would invite her friends over for small afternoon meals. Her menu would include sandwiches and small cakes, but it didn’t take long for other hostesses to copy her same style. Hence, tea time was born.

By the 1880s, tea time had taken off and even found its way into luxury hotels. It was used as a form of afternoon entertainment (at 4 pm) where the guests could socialize.

Tea time is an important British tradition and is taken seriously by many people. Though you may not be invited to a tea party every day, it’s essential to understand the difference between afternoon tea and high tea. The name alone tells you what type of atmosphere and food to expect.

Now, the only thing you have left to worry about is learning proper high tea etiquette so you don’t get kicked out!