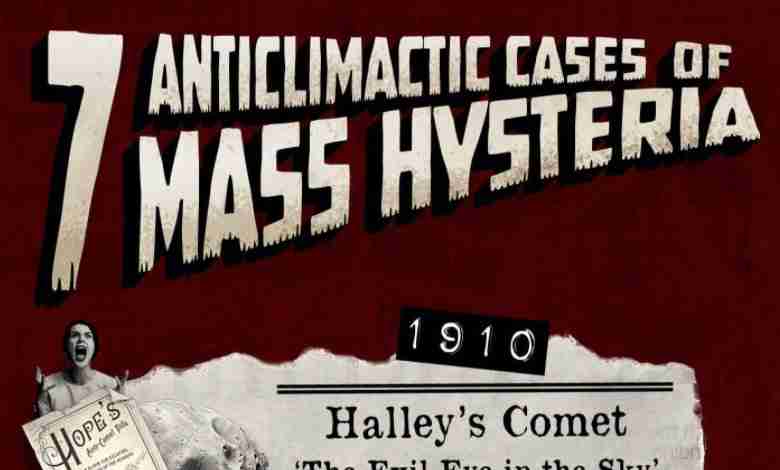 From windshield pitting to planetary alignment, society has experienced some reasonably heightened cases of hysteria throughout recent decades, many of which turned out to be nothing.

The first event in the infographic is Halley’s Comet, from 1910. While waiting for its arrival to earth, many were concerned that its tail would engulf our planet in a poisonous gas. Luckily, the comet passed with no disturbance.

In 1938, a radio-broadcasted reading of H G Wells’ novel The War of the Worlds led some New Jersey locals to believe that a real alien invasion was upon them. This was followed in 1947 with thousands of ‘UFO’ sightings near Mt Rainer in Washington, most of which could all be explained as everyday objects such as balloons, planets and solar reflections.

1954 brought with it an epidemic of windshield damage on around 3,000 cars in Seattle. While causes were suspected to be as outlandish as meteoric dust and radioactive fallout from H-bomb tests, in reality it was most likely that drivers were simply noticing regular damage on their windscreens for the first time.

The next on the list was the Y2K bug in 1999, where many believed that the transition into the new century would restart computers and cause havoc in technology, such as falling planes and plummeting elevators. Of course, nothing happened, and the clock ticked over as per usual, much like it did following the planetary alignment in May 2000. The last of the events in the infographic is doomsday, which people feared would occur in 2012.

To view more information on the infographic, please visit this page: https://www.comparethemarket.com.au/health-insurance/mass-hysteria/