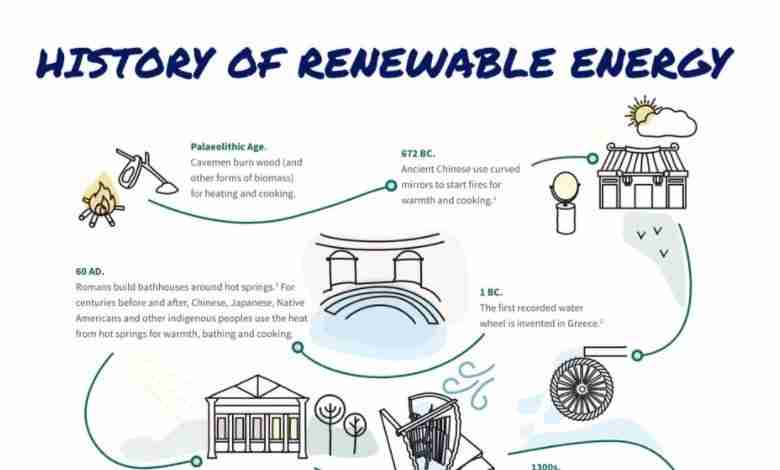 Renewable energy sources can be separated in five clear categories that are identified as being the oldest and most prominent in history – solar energy, geothermal energy, hydropower, wind energy and bioenergy. They have each evolved over time. From the most basic use to modern developments that incorporate sophisticated technology and other advancements.

To document this history, Compare the Market has created an infographic that tracks the use of each source from primitive times all the way through the industrial revolution and into the 21st century.

There was a considerable amount of research that went into supporting the infographic. Research which included insights surrounding the future of each renewable energy source. Compare the Market identified which countries were most likely to have the capacity to install each type of renewable energy. Statistics indicate that Italy and the United States are the only two countries consistently in the top ten for all five sources. The results suggest that the two countries remain world leaders in the global race for more efficient use of renewable energy sources.

Hydropower is expected to have the greatest impact in the coming years. The largest hydropower producing region is currently the Pacific and East Asia. However, in 2019 the global count for hydroelectric power capacity reached an astounding 150 countries. This was primarily due to its sustainability, reliability and affordability.

A more comprehensive timeline for each renewable energy source can be found at this page: Comparethemarket.com.au