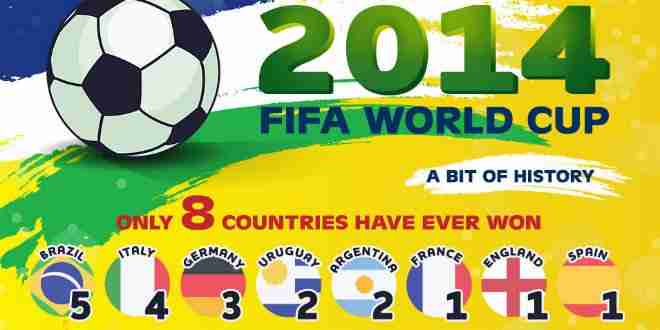 Football (soccer) enthusiasts around the world are eagerly waiting for the onset of the 2014 FIFA World Cup to be held in Brazil from June 12 to July 13. While anything is possible, all pointers are that Brazil will win this edition.

This year’s world cup games are unique in many aspects. This could explain why many people are looking forward to it.

Did you know that only 8 countries have managed to take the world cup home since its inception of the tournament?

These countries include the 2014 host Brazil, Germany, Spain, Italy, France, England, Argentina and Uruguay. FIFA and other organizers of this event believe that the viewership of the 2014 world cup finals will surpass the one billion mark after recording 715.3 million and 909.6 billion viewers in the 2006 and 2010 respectively.

The 2014 FIFA World Cup will be a historical event

Ridiculous amounts were spent in construction and renovation of the stadia. The figure stands at $3.5 billion that is thrice the amount spent in South Africa in 2010. This amount can send you to space approximately 14,000 times. If you intend to watch the football games in person, then you must be ready to spend like never before.

On average, a hotel room will cost you $282 on the opening day in Sao Paulo. Even more amazing is that a 50-minute flight between these two cities will set you back $514. The average ticket cost across the tournament is $1,345.

If you decide to travel to Brazil for the live games then you need to cunning to save some money. Carryout research online to find hotels that offers the best deals. Travel with company as this will help you save some money on hotel expenditure.

KNCTR will help you stay in contact with family and friend through free calls and keep you update on what matters on the ground.