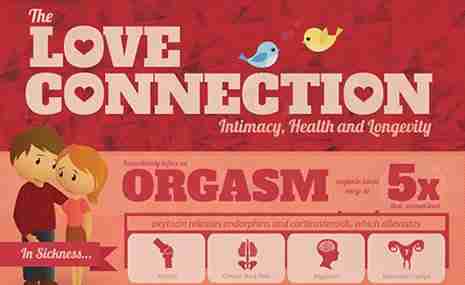 The Health Benefits of Love and Sex

Just before an individual reaches the feeling of having an orgasm, oxytocin levels surge 5 times their normal level. It increases feelings of happiness and satisfaction. When oxytocin is released in the body, migraines, chronic back pain, arthritis and even menstrual cramps are alleviated simultaneously.

Try to be sexually active at least once or twice per week. It will boost your overall immune system by up to 30%. The more frequently women participate in sexual intercourse, the less likely they are to experience the development of breast cancer.

Men in their 20’s who ejaculate more than 5 times each week reduce their chances of developing prostate cancer by an entire 1/3. Additionally, men who orgasm at least twice a week have a 50% decrease in chance of mortality than men who only orgasm just once a month.

Having sex more than three times a week will reduce the risk of having a stroke or heart attack by nearly 50%.

How sex is good for your body and brain

The hormone DHEA is released during sex. Contributing to bright eyes, a glowing complexion and even shiny, radiant hair. Feeling content and sharing love with a partner also triggers oxytocin to be released. As a result of oxytocin release, your body feels much more relaxed and at ease.